Time Dimension Therapy is a process for letting go of negative emotions and limiting beliefs that a person is struggling with.

History:  TDT came out of the techniques of NeuroLinguistic Programming (NLP), hypnotherapy, and Time Line Therapy™, to mention a few.  Many therapists today use these techniques, such as visualizations, submodality change work, anchoring and parts integrations, in their therapy practice.  Today most NLP trainers find themselves incorporating and even developing faster, more systematic ways of teaching the NLP techniques.  These techniques have developed much more sophistication and replicability over time.  As evidence, one only needs to read some of the earlier John Grinder/Richard Bandler books, such as Frogs Into Princes or Trance-formations, where the techniques were taught by lengthy examples, case studies and transcripts from their trainings, rather than succinctly outlining the technique itself.

Having used Time Line Therapy™, hypnotherapy and NLP techniques in my therapy practice for almost 10 years, I have developed new patterns, altered some of the old techniques and added twists to make the results more reliable, more consistent and faster to attain.  There are many, many ways to gain the same end results, so I don’t put these forward as the only way.  The saying, “all roads lead to Rome”, implies successes with quite a variety of techniques.  My therapy techniques take on a multi-dimensional aspect when compared, for example, with the more linear, tightly-structured Time Line Therapy™.   This eventually impelled me to adopt the more appropriately descriptive term, Time Dimension Therapy.

Case Study:  There are many, many case histories that I could present to demonstrate the effectiveness of TDT.  Here is one example, used with permission.

“A client came to me with a backache he had had his whole life.  He could count on one hand the number of mornings he’d woken up without it.  He’d had it checked out medically with an MRI and nothing showed.  Massages didn’t seem to help it either.  After some questioning, I asked him to talk to me about resentments — when was the first time he felt resentment?  He said that was easy, when he was five years old, his Mother got sick and quit playing with him.  He resented the fact that she was no longer his playmate.  I asked him what he decided, and he said, “I’d have to stiffen up and do it all myself!”  I told him to go back and talk to that little boy and get him to make a different decision, and for him not to come back until he did!  Pretty soon he said the boy (he at five) had agreed.  He cleared that limiting decision all the way back along his lifeline to now, and his back didn’t hurt.  For the next several mornings, I received a phone call from him, amazed that his back still did not hurt.  It’s been over five years, and that pain has never returned.”

Further Information:  For a more detailed explanation of how TDT works, refer to the book, Eye Yoga: How you see is how you think on pages 222-238. 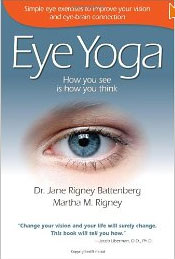